DomQuartier Salzburg – More than a Museum

Over 400 years ago, the Salzburg prince-archbishops began to transform the town into an Italian-style Baroque gem. They created a masterpiece of urban design, which is today a UNESCO World Heritage site.

The prince-archbishops’ absolutist rule claimed control over both “heavenly and earthly” matters. The building complex consisting of Residenz and Cathedral was the outward
expression of this universal spiritual and secular power. In 1803, secularisation closed the connecting doors.

Installation of the DomQuartier restored the original architectural unity of the Cathedral and Residenz precinct, also including the Benedictine monastery of St Peter’s and thus creating an internationally unique museum project.

The DomQuartier tour affords a unique survey of 1,300 years of political domination, art, music and architecture. It takes the visitor through the state rooms in the Residenz, the former official residence of the prince-archbishops, to the Residenzgalerie, with its collection of 16th – 19th-century European painting. The terrace on the Cathedral arcade links the secular with the ecclesiastical centre, the Cathedral, and offers a breathtaking view over the Old Town.

A curved staircase leads into the interior of the magnificent monumental early baroque Cathedral. Viewed from the organ gallery, the interior is revealed in its full glory. The rooms in the North Oratory, elaborately decorated with early baroque stucco, are used to hold temporary exhibitions.

The Cathedral museum in the South Oratory houses the Cathedral treasure as well as paintings and sculptures, dating from Gothic to Baroque, from the Cathedral and churches belonging to the archdiocese.

Through the Cabinet of Curiosities and the Long Gallery of St Peter’s Abbey we arrive in St Peter’s Museum, which displays art treasures from the extensive collections of the Archabbey, the oldest monastery in the Germanspeaking world. 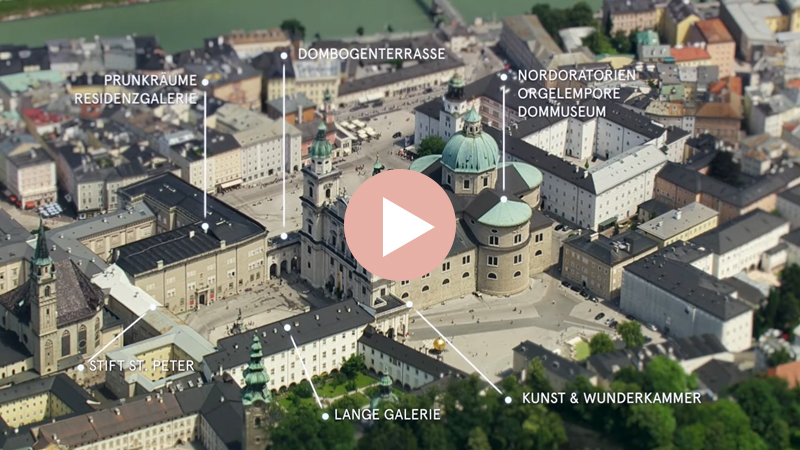