The Cathedral Museum in the Salzburg DomQuartier

The Cathedral Museum is situated high above the south side-aisle chapels. The permanent exhibition shows mainly art-works from the Salzburg Archdiocese, dating from between the 8th and 18th centuries. Founded in 1974, the Museum has formed part of the DomQuartier since 2014, and includes the Chamber of Curiosities in the south arcade. 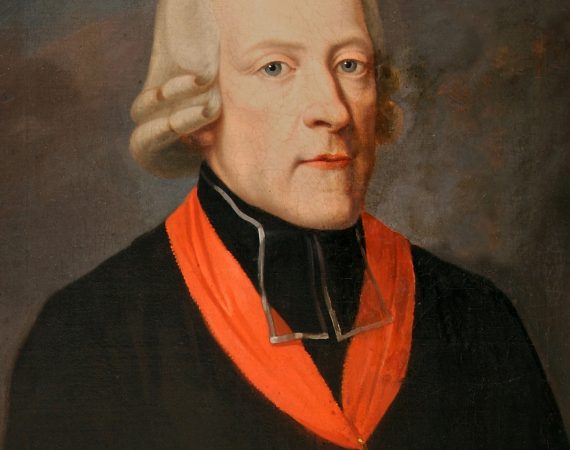 Exhibition on the occasion of the 250th anniversary Count Hieronymus Colloredo was elected Archbishop of Salzburg on 14 March 1772. This first exhibition on the last ecclesiastical ruler and his…

The South Oratory containing the permanent exhibition is on the same level as the great organ loft and the North Oratory opposite. Both oratories, which have balconies over the nave, are divided into four vaulted, stuccoed rooms. Each easternmost room is appointed as a chapel, with ceiling paintings dedicated to St Rupert (north) and St Virgil (south).

The principal exhibits are the liturgical utensils, many of which are still in use at Pontifical High Masses. 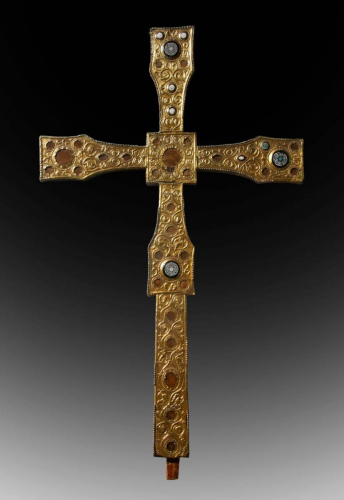 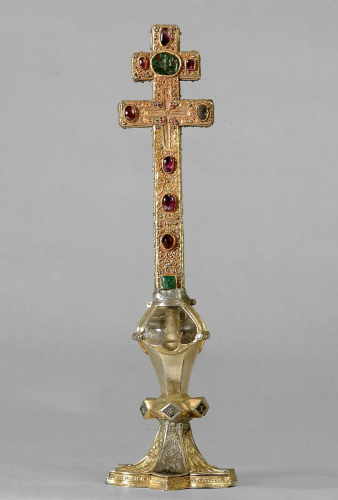 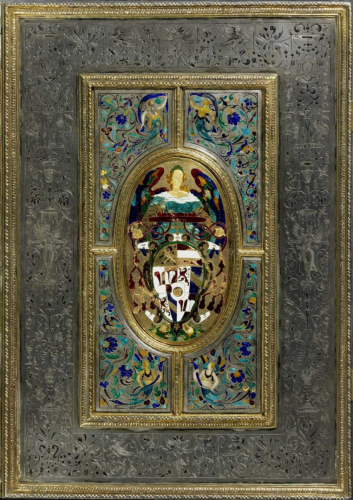 Missal of Prince-Archbishop Wolf Dietrich von Raitenau
The  Reliquary Cross with two arms from Hungary (c 1100, base: 14th C), possibly the former cross of allegiance used by the Hungarian kings, was probably brought here only in 1482. The Eucharistic Dove (peristerium) from Limoges (1st quarter 13th C), used for keeping consecrated hosts, was once suspended above an altar.

Outstanding Late Renaissance works dating from the reign of Prince-Archbishop Wolf Dietrich (1587–1612) include a disc ostensory (1596 – one of the earliest north of the Alps) and a Roman Missal with a splendid silver and enamel cover (1601/1603).
A century after the Wolf Dietrich Ostensory, Prince-Archbishop Johann Ernst Thun (1687–1709) ordered from his court goldsmith Ferdinand Sigmund Amende (1656–1731) the unique Precious Ostensory (1697) decorated with vines and studded with jewels.

The oldest and artistically most valuable object is the Cross of St Rupert (c 750), on loan from the parish church of Bischofshofen. Showing features of both Anglo-Saxon and Mediterranean art, the largest surviving Early Mediaeval metal cross may have been fashioned on Salzburg soil.

Further art treasures, from various churches and monasteries in the Archdiocese of Salzburg, are mainly Gothic and Baroque paintings and sculptures.

To listen to (audio guide)
“Cathedral Museum and Cathedral Treasure”

Paintings and sculptures dating from the 14tth – 18thcenturies 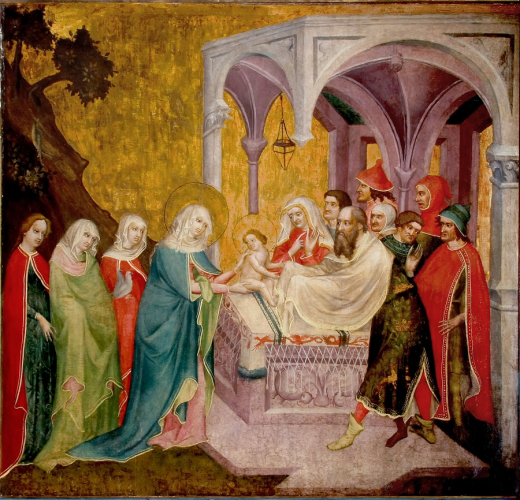 Presentation of Jesus at the Temple, Master of the Pfarrwerfen Altar 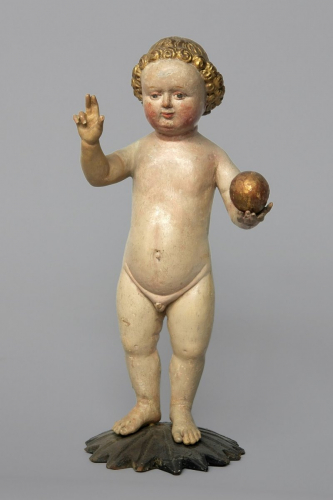 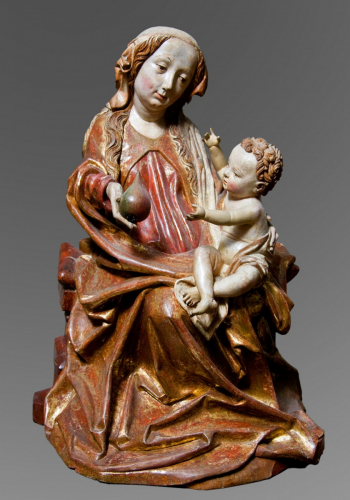 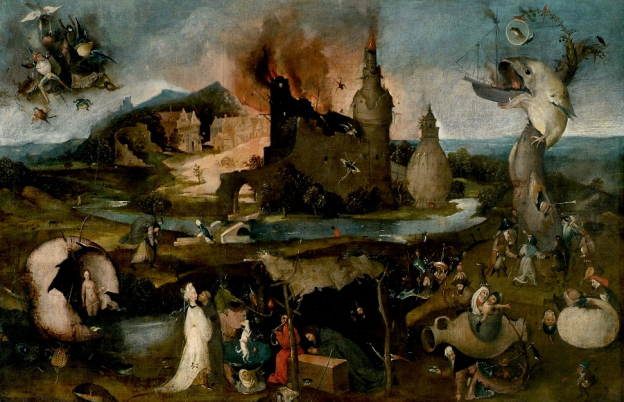 he Temptation of St Anthony, follower of Hieronymus Bosch 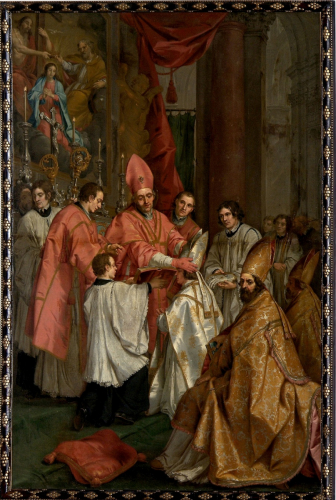 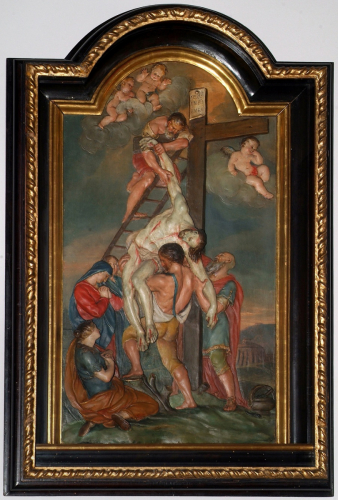 The Deposition from the Cross, Georg Raphael Donner 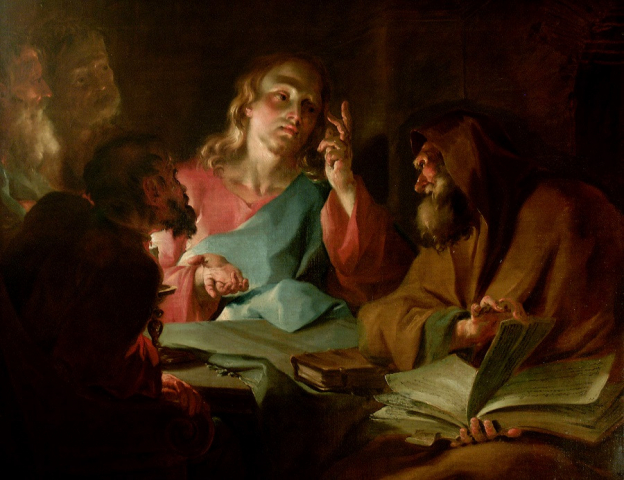 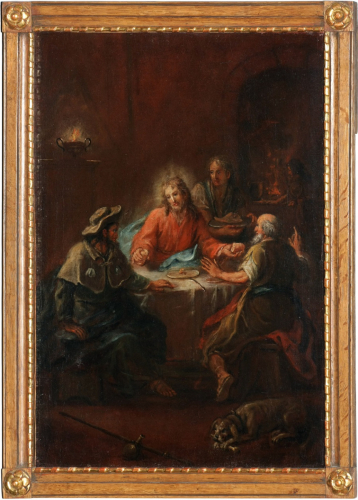 Christ in Emmaus, Johann Martin Schmidt
The Pfarrwerfen altar panel (c 1425/1430) and the Schöne Madonna from Radstadt (c 1430/1435) are fine examples of the late “Soft style”. An Enthroned Madonna reflects the woodcarving style of Michael Pacher (c 1495–1500), who created his last and greatest altar in Salzburg. In The Temptation of St Anthony (c 1500) an imaginative follower of Hieronymus Bosch depicts hell encroaching upon earth. 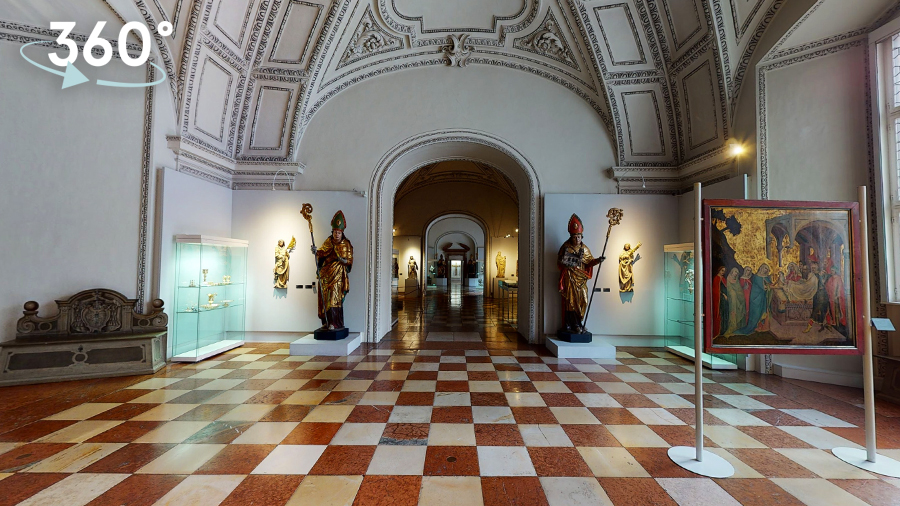 The Cabinet of Curiosities

Such cabinets with their original furnishings, as that in the south arcade of the Cathedral, are rare in Europe. The marble floor, stuccoed vaulting and showcases date back to the original archiepiscopal Cabinet, around 1668–1670. 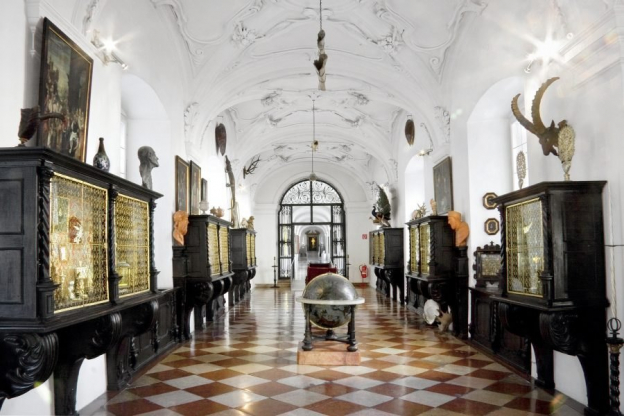 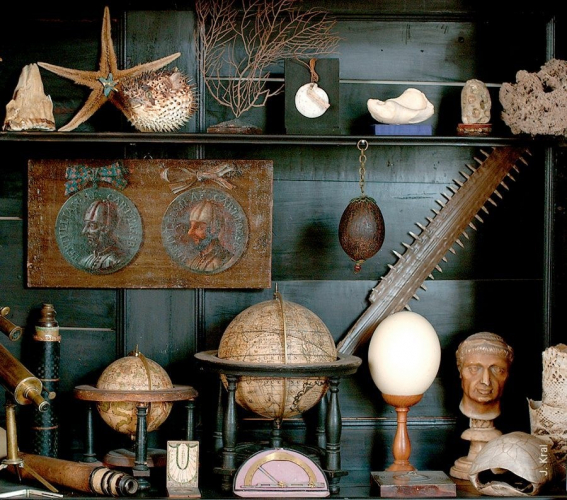 Globe cabinet
After the dissolution of the Archbishopric in 1803, however, the original collection was lost to Salzburg. With the founding of the Cathedral Museum in 1974, the Cabinet was restored to its original function on the basis of the old inventories. The new Cabinet of Curiosities, with objects from the art market and loans from St Peter’s Archabbey and private collections, has assembled curiosities from nature, art and technology to illustrate what a 17th-century universal collection might have looked like.

Virtual 3D tour of the Cabinet of Curiosities

To listen to (audio guide)
“The Cabinet of Curiosities ”

History of the Museum

The Salzburg Cathedral Museum is comparatively recent. While the first diocesan museums in Austria were installed around 1890/1900, the Museum of the oldest diocese in modern Austria was opened only in 1974. 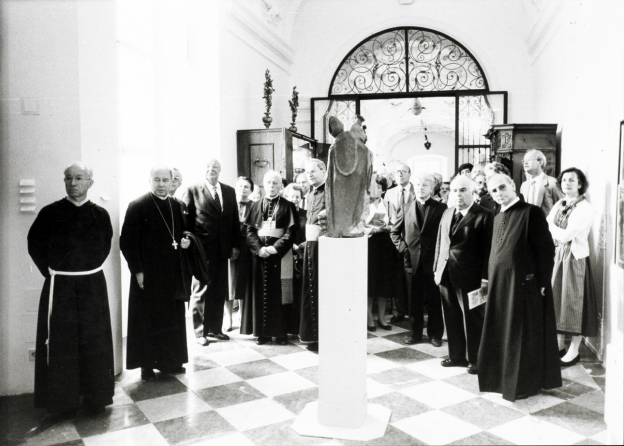 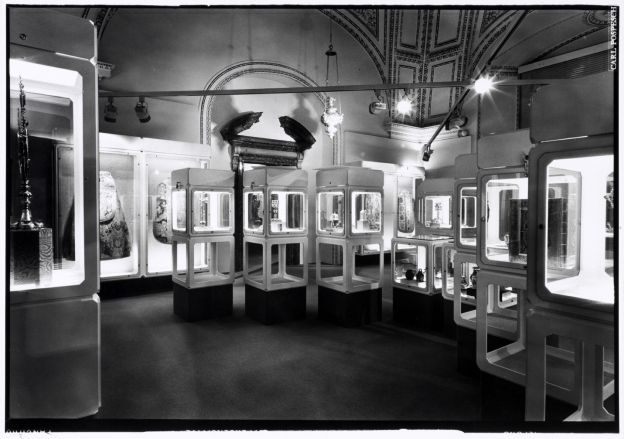 Historic view of the Museum 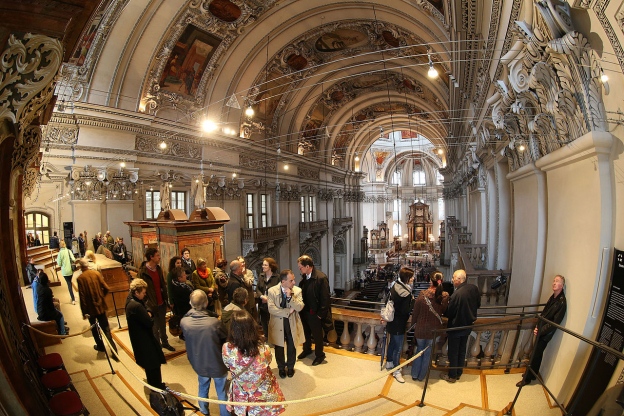 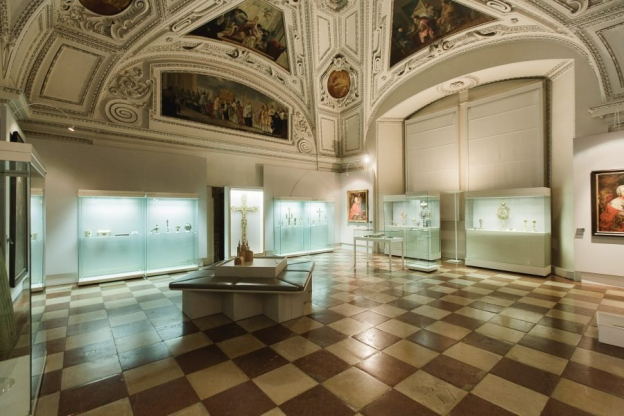 The Cathedral Museum is the refuge and the treasure-house of the Church in Salzburg. It houses the art-works of the Cathedral and the Archdiocese, contributes to research on them and makes them accessible to the public. It seeks to educate the public, to promulgate the faith and the identity of the Church, it communicates and represents the Archdiocese both internally and externally.

Situated in the South Oratory, the Museum also comprises the Cabinet of Curiosities in the south arcade. With their marble floors (c 1620) and stucco dating from the original construction (c 1660), the views of the Cathedral interior and over the surrounding squares, these rooms have a manifestly connective function between Cathedral and town. The Museum has formed part of the DomQuartier since 2014.

The collections comprise mainly art-works from the Salzburg Archdiocese and adjacent regions, dating from between the 8th and 18th centuries. As customary for an ecclesiastical museum, all genres of art are represented, with a focus on the decorative arts. The Cathedral treasure and the Cabinet of Curiosities offer special fields. Only a few of the art-works date from mediaeval times, so the picture of Salzburg Town and Province is markedly baroque.

Only a small proportion of these collections is owned by the Museum; many items are on loan from monasteries and churches in the diocese. A considerable part comes from St Peter’s Archabbey, and some objects are the property of the Province of Salzburg or of the Kardinal König Art Fund.

The Salzburg Cathedral Museum is comparatively recent. It was founded in 1974, long after the diocesan museums in St. Pölten (1888), Linz (1906) and Vienna (1933). At that time, considerable parts of Salzburg’s ecclesiastical art collections had already been carried off or sold. Thus conservation and expansion of the present collections are two important aims of the Museum.

In collaboration with the partners of the DomQuartier, the Museum organizes special exhibitions dealing with ecclesiastical and/or Salzburg art and history.

Guided tours of these exhibitions, of the Cathedral, the Cathedral treasure and the Cabinet of Curiosities are available for children, young people and adults.

Interior view of the cathedral from the west gallery

To listen to (audio guide)
“The Salzburg Cathedral”

Museum: Domplatz 1a (Entrance in the Cathedral porch)

Since 2014, the Cathedral Museum Salzburg has been part of the DomQuartier. The DomQuartier tour takes visitors through the special exhibitions in the Residenzgalerie.