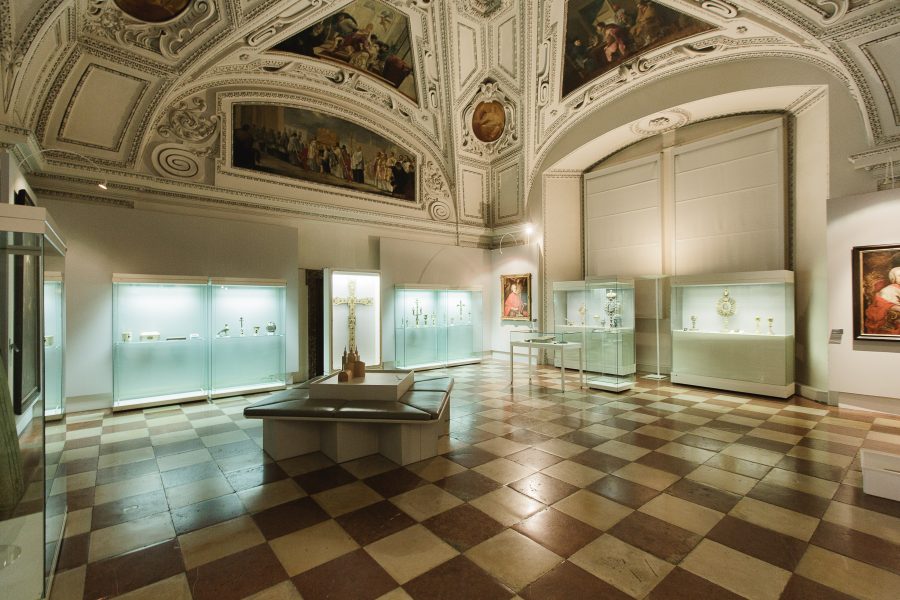 The upper Oratories of the Salzburg Cathedral, some of which were formerly used as chapels, have housed the Cathedral and Diocese Museum since 1974, uniting artworks from 1300 years of Salzburg church history.
The core of the Salzburg Cathedral Museum is the Cathedral treasure. This consists of implements and vestments used historically and presently at the Cathedral for liturgical purposes: chalices, monstrances, bishop’s crosiers, mitres and copes. They illustrate the faith, artistic sensibilities and wealth of those who commissioned them.
For the most part, the paintings and sculptures exhibited at the Cathedral Museum come from churches and monasteries of the Archdiocese of Salzburg, conveying an impression of the artistic richness of the region.
Among the main attractions of the Cathedral Museum are the Cross of St. Rupert from the 8th century, the host dove from Limoges, a monstrance for precious sacred objects and relics, as well as paintings by Paul Troger and reliefs by Georg Raffael Donner.

In the Southern Cathedral Arcade, Prince-Archbishop Guidobald Count Thun and his successor, Max Gandolf Count Kuenburg, installed a Cabinet of Curiosities during the second half of the 17th century, assembling objects made of quartz, ivory and precious stones. After the end of the old Archmonastery, the collection was dispersed and only the display cabinets remained. In 1974 the collection was reconstructed along the lines of a typical Baroque Cabinet of Curiosities.
Today, the Cabinet of Curiosities shows objects from nature and works of art: preserved animals, fossils, scientific tools, cut quartz objects, and much more.