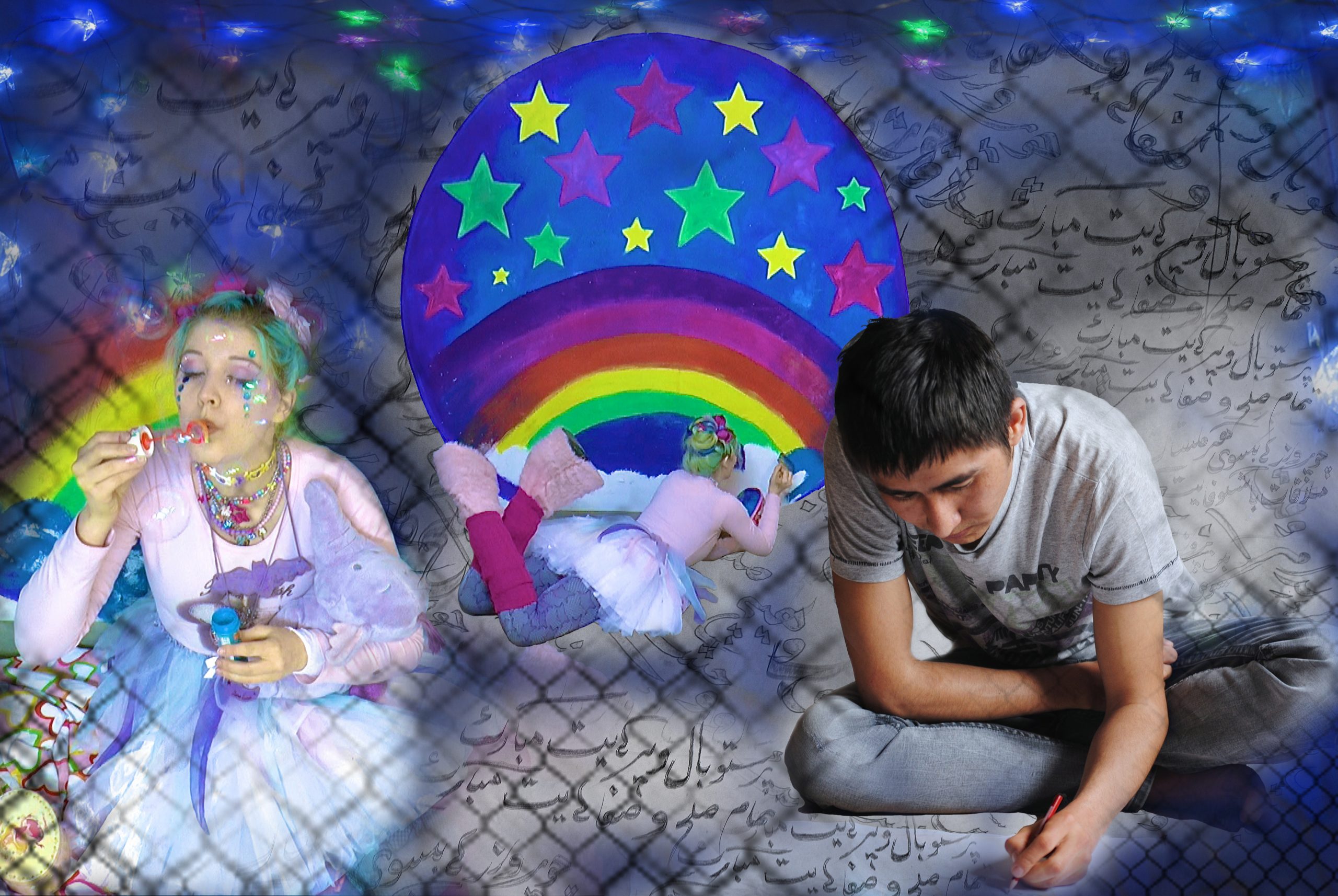 In the framework of a participatory exhibition project the DomQuartier Salzburg presents video projections, creative photo studies and multi-media installations with interactive elements made by students at the Mozarteum University and the University of Applied Sciences Salzburg. The works are shown in four halls of the Residenzgalerie and in the rooms of the North Oratorio. The current themes of space, time and identity are set in relationship with the outstanding works of art and historic experiences in these spaces; art-historical subject matter is transformed into an individual pictorial language, thereby allowing new sensual experiences.

What identity does a country have, what philosophy of life or characterisation in regard to society, culture or politics?

Austria consists of more than merely mountains, lakes and a splendid landscape. Welcome to Austria deals with the image shaped by worldwide media and formed in people’s minds. The various illustrations, referring to certain biased opinions, are an attempt to take a different angle. Inspired by paintings in the Residenzgalerie, diverse themes and figures were adopted and integrated into the works. The interactive wall invites the viewer to get to know Austria in a different way.

Our idea of a “portrait” is generally the representation of an individual, a person with an identity. On closer inspection of some pictures which purport at first glance to be portraits, we recognise that many of them do not fulfil this criterion.

Judith Zaunschirm’s photographic work deals with the representation of people in Residenzgalerie paintings whose titles contain no indication of the identity of the protagonists. Where a person is accorded no great importance as an individual, he/she nevertheless retains identity in the form of a pose. The pose is fashion, is gender, is role model, and dependent in its connotation on the viewer’s concepts and appreciation, which are in turn the result of his/her socio-cultural origin.

The self-portrait. The search for the intrinsic, the authentic – that which constitutes one’s own person as distinct from all others.
The subject is not really looking at himself, however, but rather at himself through the eyes of others. So if we ask: “Who am I”, we are automatically asking a further question: “Who are the others?”
The installation Scramble Suit deals with precisely this question, seeking the answer in the style of self-portraits in the baroque period, in conjunction with contemporary literature.

White is not a colour, says the physicist. Are we talking about white light?
In their photo series WHITE, artists’ collective Katrin Froschauer, Valentin Backhaus and Christian Zwerschina explore the effect of disorientation and lack of contrast. They use white light as their central scenic element. Rembrandt made many of his figures glow “from the inside”, using no specific light-source. This indeterminacy, which causes vitality to overflow, provides the starting-point for these photographic studies.

The starting-point for this work was the painting The Flight to Egypt by Louis Licherie de Beuron, which has been reinterpreted and realised as a digital illustration, the chosen style intended as reminiscent of cut gemstones. This is a reference to the elaborate process for making the pigment ultramarine, originally made by grinding lapis lazuli into a powder. The message of the historical painting is reversed, so that in the contemporary adaptation the angels are interpreted not as a symbol of protection, but as turning against the protagonists. The angels’ protective cloak is transformed into a wire-mesh fence, emphasising the menace and alluding to the current refugee problems – demonstrating the helplessness and vulnerability of those forced to flee.

Here Magdalena and Navid offer an insight into their world of ideas. Everything centres on memories, fears and the attempt to come to terms with this world and with their experience. Both of them have created a secure place of refuge from reality. Magdalena paints a world of her own; Navid orders his thoughts in poems and song texts. Childhood always plays a major role.

While Navid, in Afghanistan, had to grow up quickly and work, here in Austria Magdalena enjoyed the luxury of remaining a child. Thus, having grown up under such contrasting circumstances, they now realise that, in Austria, they are nevertheless living in the same world and trying in a similar way to understand this world.

This installation refers to the mass assaults on women in the night of New Year’s Eve 2015/16. On the station square in Cologne, as well as in other German and Austrian towns, women taking part in the celebrations were deliberately surrounded by groups of men under the influence of alcohol and drugs and subjected to sexual attacks. Media reports on the situation of the women frequently used the expression “to run the gauntlet”. The installation invites viewers – irrespective of gender, age or origin – to place themselves physically and psychologically in a vulnerable situation, exposed to uncontrollable groping and with limited scope for action.

In an extreme situation, such as when fleeing, one is soon confronted with the question of identity and belonging. You’ve had to leave your home. So is home identity? You’re confronted with a new language. Is language identity? You come into contact with a strange culture. Is culture identity? And with each new experience, a person’s identity changes.

This work focuses on fleeing and the concomitant question of identity, demonstrating at the same time that people of the most diverse origins have had to flee and to develop new identities. The Bible verse translated into Arabic, in the form of a language course, represents a rapprochement between people of different language, culture and religion.

The starting-point of the work is the people-smuggling scandal in Austria. Based on refugees’ true stories, the Stop Motion film is designed to show selected stages during their flight. The very simplicity of the illustrations reveals their constructed quality, since the flight was not experienced by the designer, who merely attempts to recreate it. The film – shown in a kind of box – plays on the viewer’s senses, feelings and imagination. In the darkness of this (smuggler’s) box, we can find nothing to hold on to. The work is backed by Caritas Salzburg and refugee families Kurdia and Alkhatib.

The 19th-century views of Salzburg in the Residenzgalerie give a romanticised rendering of the town. While the paintings show an idyllic Salzburg, the town has meantime been faced with the major challenge of the huge influx of refugees. Both physically and mentally, bridges have to be built and barriers removed.

The video shows a modifiable bridge structure consisting of individual pagodas. Based on Buddhism, where this architectural form symbolises the Lord’s body, the pagodas are constructed on the principle of the human body. Just as DNA links us as human beings, the pagodas can be linked to form a bridge.

The aim of this unification is to create a durable link between immigrants and local inhabitants.

Backed by the Diakoniewerk refugee accommodation in the Straniakstrasse in Salzburg.

The interplay between warm gold and cold silver reveals an incorporeal, non-real feminine person who, wrapped in a protective safety blanket, merges into her surroundings, thus becoming a paradisiac phenomenon detached from space and time.

Inspired by the radiant splendour of the precious metals used in the baroque and other periods to decorate buildings, the  excessive use of the shining blankets  draws attention to exaggeration in a kind of aestheticisation with unpleasant effects.

Are today’s humane values dazzled by this utopian paradise? Is not this utopia already becoming  the operative principle of a ruthless Society?

What is the value of a work of art? This question is answered with four gilded strips of wood framing a canvas. Also outside the field of art, our society is based on a system of evaluation; the boundaries between the symbolic designation of value and the perception of it as something that actually exists are increasingly blurred. Where does the value of a person begin? How does a person in a society experience humane treatment – when does he/she become a “person” in the eyes of that society? A system that attempts to evaluate a person with a piece of paper interchanges the person’s true value – which gives him his identity – with a purported expediency.

What is a ‘gap’? An unfilled space denoting the negative form, the imprint of being; it is an ever-present stage appropriated for performance, and in every situation actively shaped by interacting positive forms of being. It serves as the conscience of our natural limitation, as well as the assurance of our absolute integrity. When people gather to pray in the North Oratory of Salzburg Cathedral, then what takes place there is the most intensive possible form of filling a gap creatively: the attempt to connect limited, subjective beings with an abstract, unlimited idea. If today we have the opportunity of shaping the space between ourselves and others, what form can we give to this physical and psychological threshold?

A gate between reality and illusion? An invisible border between inside and outside? The walk-in installation IF exaggerates both subjective and objective sensory and spatial perception, offering us time to find a standpoint.

One of the principal features of baroque architecture is the extravagant use of mirrors. The two artists take this feature as the starting-point for their work in the St. Rupert Oratory of Salzburg Cathedral.