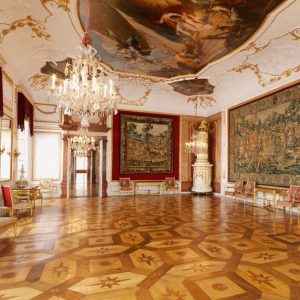 Over the course of centuries, the Residenz Palace in Salzburg served the Prince-Archbishops as their representative seat. Even during the Baroque era, the city palace of the Prince-Archbishops was among the most impressive representational buildings in the German-language region.
Today, the Residenz Palace at the heart of Salzburg’s old town is one of its most impressive attractions. The self-guided tour takes the visitor through precious interiors which give testimony to the rulers’ instinct for staging their own power.
As the envoys of foreign princes, statesmen and court employees directed their steps through the apartments towards their audiences with the Archbishop, thus today’s visitors pass from the Carabinieri Hall with its 600 square metres through the rooms with their increasingly precious décor: the Knights’ Hall, the Council Room and Antecamera give way to the sumptuous highlight, the Audience Hall. The private area of the Prince-Archbishops, immediately adjacent, consisted of the Study, Coffer Room, the Bedroom with its private altar, the Beautiful Gallery and other public rooms.
Among the treasures are the classicistic ceramic stoves, Venetian mirrors, ceiling frescoes by Johann Michael Rottmayr, crystal chandeliers made of Bohemian grey glass, high Baroque ceiling stucco with gold leaf, precious clocks and paintings.

The upper Oratories of the Salzburg Cathedral, some of which were formerly used as chapels, have housed the Cathedral and Diocese Museum since 1974, uniting artworks from 1300 years of Salzburg church history.
The core of the Salzburg Cathedral Museum is the Cathedral treasure. This consists of implements and vestments used historically and presently at the Cathedral for liturgical purposes: chalices, monstrances, bishop’s crosiers, mitres and copes. They illustrate the faith, artistic sensibilities and wealth of those who commissioned them.
For the most part, the paintings and sculptures exhibited at the Cathedral Museum come from churches and monasteries of the Archdiocese of Salzburg, conveying an impression of the artistic richness of the region.
Among the main attractions of the Cathedral Museum are the Cross of St. Rupert from the 8th century, the host dove from Limoges, a monstrance for precious sacred objects and relics, as well as paintings by Paul Troger and reliefs by Georg Raffael Donner.

In the Southern Cathedral Arcade, Prince-Archbishop Guidobald Count Thun and his successor, Max Gandolf Count Kuenburg, installed a Cabinet of Curiosities during the second half of the 17th century, assembling objects made of quartz, ivory and precious stones. After the end of the old Archmonastery, the collection was dispersed and only the display cabinets remained. In 1974 the collection was reconstructed along the lines of a typical Baroque Cabinet of Curiosities.
Today, the Cabinet of Curiosities shows objects from nature and works of art: preserved animals, fossils, scientific tools, cut quartz objects, and much more. 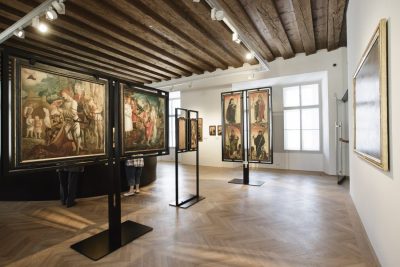 More than 1300 Years of Monastic History

The valuable art treasures collected by the Archabbey of St. Peter and exhibited in the Long Gallery and the Museum depict the history of the oldest monastery in the German-language region.
Since its founding, or rather renewal by Bishop Rupert in 696 AD, St. Peter’s looks back with unbroken continuity and is considered the oldest monastery in the German-speaking region still in existence today.
As in most monastic collections, the medieval church treasure forms the basis of the collections at St. Peter’s. The religious lifestyle of a monastery and the celebration of the sacred liturgy required certain implements (vasa sacra) and textiles (paraments) which were kept in the sacristy and later in the treasure chamber. The most important collections of the Archabbey include not only the church treasure, but also a collection of paintings, large holdings of prints, coins, arts and crafts, minerals, musical instruments and many other artefacts. 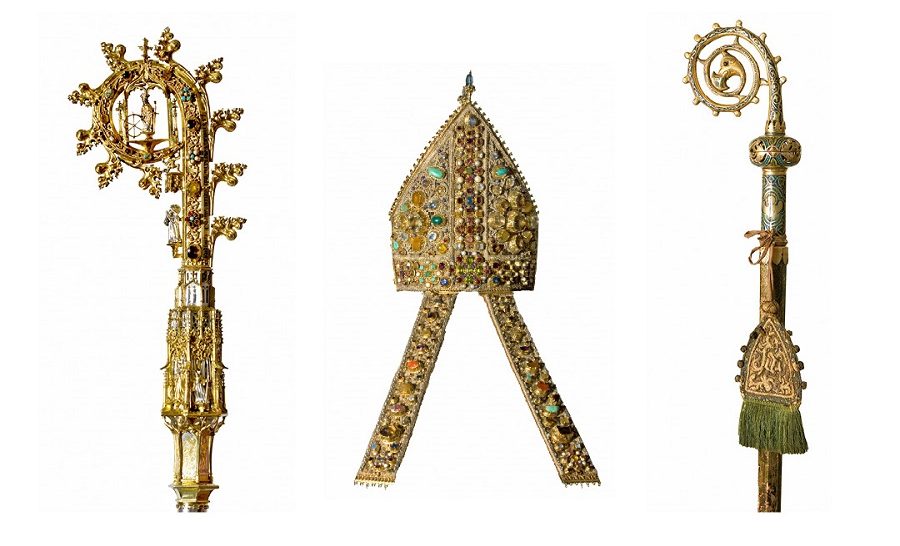 Highlights of the collection

St. Peter’s Museum, located in the so-called “Wallis Tract” of the old archiepiscopal Residence (the former Court Arcade Building), presents a selection of the most beautiful objects: for example the so-called “St. Rupert’s Pastoral Staff” (an abbot’s crosier from the 11th or 12th century), a chalice from the 12th century and an especially well-preserved chasuble cross from the 15th century. Then there are the objects that form the pride of the collection acquired by Abbot Rupert V. Keutzl around 1480: a mitre richly set with precious stones, an equally artfully decorated pastoral staff and a matching clasp for a liturgical vestment. 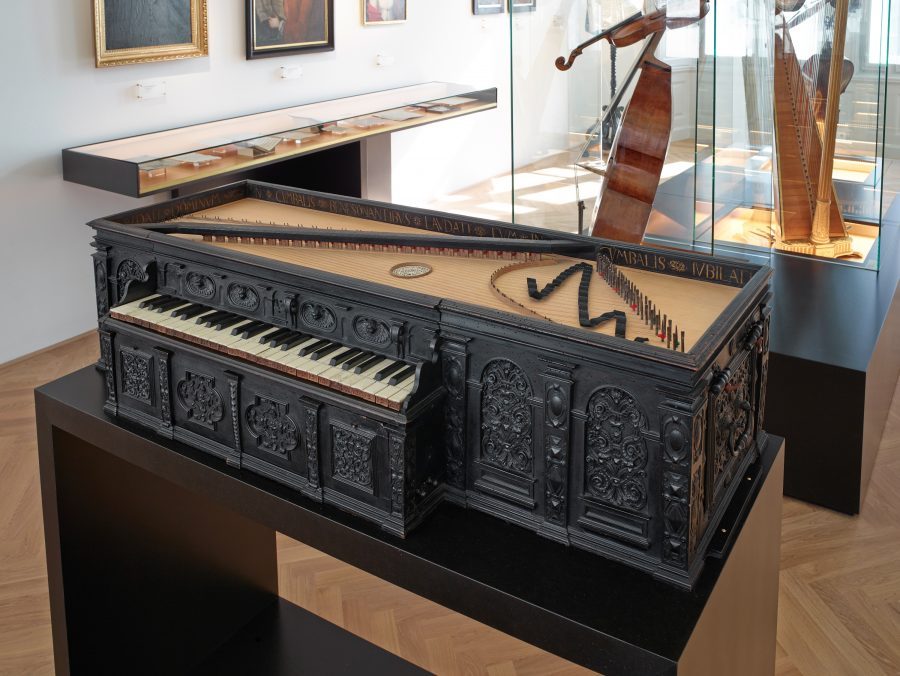 St. Peter’s and Music
The division “St. Peter’s and Music” traces the fruitful connections between the Archabbey and Johann Michael Haydn and Wolfgang Amadeus Mozart, showing, among other objects, a “claviorganum” richly decorated with carvings: it is a masterwork of craftsmanship, a kind of organ first acquired by Archbishop Wolf Dietrich. 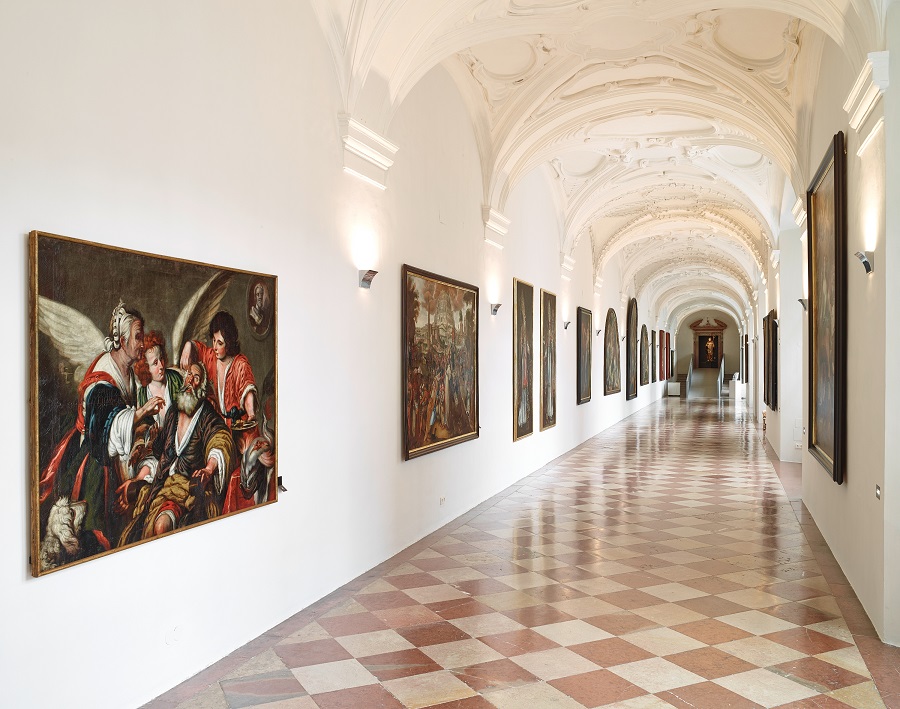 One of the earliest gallery buildings north of the Alps

The former painting gallery of the Prince-Archbishops, the Long Gallery, built between 1657 and 1661 under Guidobald Count Thun and transferred to the Archabbey of St. Peter’s in 1819, shows large-scale paintings from the Abbey’s collections, which were intended mainly for religious contemplation and created for various rooms of the Monastery.